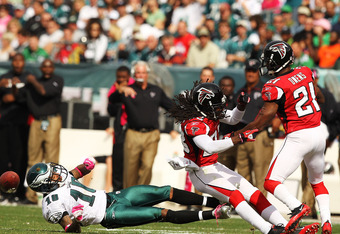 After a massive collision that left Desean Jackson and his assailant Dunta Robinson reeling, it appears that both men are unlikely to play this week.  Jackson suffered what was described as a "severe concussion" and Coach Reid says it would be "a real stretch" for Jackson to play against Tennessee.  Robinson claims to feel fine, but under the league's current policy concerning concussions, must be cleared to play by an independent physician.

This weekend's NFL slate also featured a couple of devastating shots dealt by Pittsburgh's resident badass, James Harrison.  He let it be known afterward that his goal is to deal out pain.  I kind of had a feeling that he was a fan of breaking bones after he slammed the shit out of that Browns fan that came on to the field a few years back.

In response to this brutal Sunday, Ray Anderson, the NFL's executive VP, told AP reporters that the league is considering suspensions for blows to the head, in an effort to help curb some of the injuries that have been occurring.

"There's strong testimonial for looking readily at evaluating discipline, especially in the areas of egregious and elevated dangerous hits," he said in a phone interview. "Going forward there are certain hits that occurred that will be more susceptible to suspension."

More and more evidence of the severe and lingering effects of head injuries is compiled every year.  It's pretty obvious when you take a look at some of the ex-NFL greats, that a lifetime of using your skull as a battering ram will take its toll (see Ted Johnson).  Nobody wants to see a concussion, or worse.  The type of head first assaults that are in question are usually the cause of even more severe injuries like the kind that happened to Rutgers player Eric Legrand against Army on Saturday.

On the other hand, bone jarring hits have always been a hallmark of professional football and part of what draws us in.  It is the modern day version of the gladiators' arena, and even 2000 years later, the blood lust of fans remains insatiable.  The bigger the hit the louder the cheer.  I have to admit, I'm cheering too.  I love when someone nearly gets decapitated for the sake of our enjoyment.  Common sense has to take over at some point, however, and that point should be when blows are aimed at or lead with the head.

It has come time for something to be done and the NFL is finally going to speak up.  As much as it pains me to say it, we need to turn this thing down a notch.  The nature of the game lends it self to violence and injury, and while that will never be changed completely, if things keep going the way they are there will be no athletes to cheer for.  As these players get faster and stronger every year, the potential for injury becomes greater.  The only way to effectively get the point across to the players is going to be via suspension.

Famous for being a hard hitting defensive back and often called a cheapshot artist, Rodney Harrison, formerly of the new England Patriots, had this to say concerning punishment of players:

"You didn't get my attention when you fined me 5 grand, 10 grand, 15 grand," he said during the pregame broadcast for "Sunday Night Football." ''You got my attention when I got suspended and I had to get away from my teammates and I disappointed my teammates from not being there. But you have to suspend these guys. These guys are making millions of dollars."

Point taken Rodney.  Now all that is left is to see who gets made an example of.

Kyle
All Posts »
PrevPreviousPat Burrell Was an X-Factor for the Phils This Year
NextNew York Fans Can Be Douchebags Too!Next