Good morning. I assume I’m the only one who feels like they ate a small-to-medium sized whale this weekend and haven’t fully passed it yet? Good, good. More. Already have all of our shirts? Check out Philly Phaithful’s great selection and their Cyber Monday Sale– 3 for $50.

Amazon. You probably shop there. If so, click our link as we get a small commission for referring the sale. Now that the holidays are approaching, you can both get your Christmas shopping done and support us by doing so.

Tickets. We have the best available tickets for Eagles games on the secondary market rounded up at Crossing Broad Tickets.

1) Packers: Beyond that, the Packers have two outstanding wide receivers, a monster of a running back, and a defense that I guess is pretty good? They’re beatable on the road, but if the road to the Super Bowl goes through Green Bay, forget about it.

2) Cardinals: That said, things get even tougher for the Cardinals from here on out: Seahawks (twice), Chiefs, and 49ers again. They’re going to lose at least two of those games, and they have to play in St. Louis, where the inconsistent (but dangerous!) Rams have beaten both the Seahawks and Broncos. As of now the Cardinals deserve a top-two spot, but they are shaping up to be 2014’s Chiefs— peaking (beaking?!) too early. The early bird might not get this worm.

What I didn’t see coming was them losing to the Falcons. They’re 0-2 since I wrote that and they play the Chiefs, Rams (DANGER!), Seahawks and 49ers to close out the season. Further, Drew Stanton stinks. He has one touchdown and three interceptions in his last two games, and there was a series of throws yesterday – one of which was intercepted – that were so alarmingly bad that I thought Scott Hanson was going to instruct his producers to black list all Cardinals games on Red Zone from here on out.

3) Eagles: Everyone wants to write off the special teams play as an unreliable fluke, but how many punts do they have to block or return before people start realizing that you can basically count on one game-changing play per game from the unit?

Anyone else still think they’re not a playoff team because they got their brains bashed in at Lambeau?

4) Lions: By my count, that’s a 1-14 record in their final 15 games over the last two seasons combined. And right on cue this year, Week 11, they managed a measly six points against the Cardinals. That sound you hear is Lions fans conversing with Ned Ryerson.

They followed that up with a laughable nine points against the Patriots, but won on Thursday. They have an embarrassingly easy schedule in their remaining games: Bucs, Vikings, Bears and Packers. This might be the year, Lions fans… that your team gets into the playoffs and loses in the first round!

5) Seahawks: Those 571 and 7.7 [rushing] yards figures are already career highs through 10 weeks. Yeah he’s going to die and won’t make it through the season.

That was about Russell Wilson. He’s had 17 rush attempts in the two games since. He’s going to snap like a twig one of these days and the Seahawks will be done. But for now… their defense is getting scary good again. They’re 2-3 with the Eagles in the NFC. The winner this week gets the second bye, in my opinion. HOW WAS THIS GAME NOT FLEXED?

As for the rest? I still stand by the 49ers being a total enigma, the Saints being the team that probably breaks our hearts in the playoffs, the Cowboys finishing at 2-4 (1-1 so far), the Rams being the best bad team in the league (52-0 yesterday!) and the Redskins being hilarious.

Brandon Boykin was a guest bartender on “Watch What Happens Live: Real Housewives of Atlanta” this weekend. I have no idea what that sentence means, but I kind of want to injure myself for having written it. H/T to (@banditmax) and (@TheTMan117) 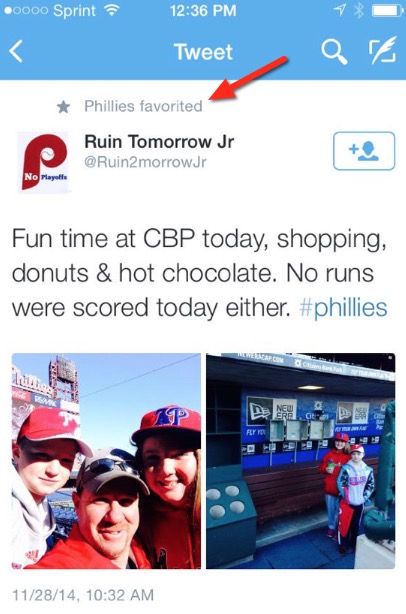 The Phillies favorited a Tweet by Ruin Tomorrow Jr. that criticized the team. They, they… don’t do social media well. H/T to (@GoTeamOakie)

Great, touchy-feely article by Mike Sielski about Nick Sanchez, Mark’s father, and a Thanksgiving to remember.

Will LeSean McCoy be back next year?

The Kelce family is awesome:

Speaking of, this is quite possibly the weirdest press release I’ve ever received— from startup dating site Pozee:

Mind you, the actual text of the release makes no mention of Kelce. I’m… perplexed.

Reader Mark, a St. Joe’s grad, checks in with a response to my ripping of Phil Martelli last week:

Love the completely unnecessary shot at St Joe’s bball this morning.  Completely unnecessary but I would have done the EXACT same thing had I run a sports blog rather than just read one while I’m supposed to be working.  How else do you think Phil keeps a job??  You guys beat Michigan and we go to overtime at home to beat LIU, what the fuck (I was there it was terrible)?!  Nova is good this year, real good, didnt look that good against bucknell though??  Get your shots in all year…..

Sju is fucking terrible, they’re “re-building”  dont you rebuild after you make a long run in the tournament or 30 win season?  Na they’re just rebuilding after a first round loss to Uconn.

Mo’ne Davis named Sports Kid of the Year, because of course.

Janay Rice on the Today Show. And Janay Rice’s In Her Own Words on ESPN.com.

Would love to replace Jamie Moyer in Phillies broadcast booth. Give me a call

The Giants are 0-7 since they stomped on the Eagles' logo.

New episodes of The Tony Bruno Show and BGN Radio are up, and a new Crossing Streams coming this week. LibertyBroadcast.co.

Kyle Scott
Kyle Scott is the founder and editor of CrossingBroad.com. He has written for CBS Philly and Philly Voice, and been a panelist or contributor on NBC Sports Philly, FOX 29 and SNY TV, as well as a recurring guest on 97.5 The Fanatic, 94 WIP, 106.7 The Fan and other stations. He has more than 10 years experience running digital media properties and in online advertising and marketing.
All Posts »
PrevPreviousJamie Moyer Is out as Phillies Broadcaster
NextAnd Now, What It’s like to Converse with Michael Del ZottoNext